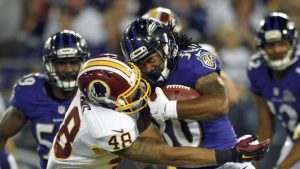 Terrence Magee has been released by the Ravens

Today the Baltimore Ravens waived WR Chuck Jacobs and RB Terrence Magee and signed 11 undrafted rookies.  Magee was signed as an undrafted free agent by the Ravens after the 2015 NFL Draft. He played college football at LSU.

Jacobs signed as an undrafted free agent with the San Francisco 49ers in 2013. After attending Laney Junior College he went on to play at Utah State.