Peyton Manning was close to signing #Titans back in 2012 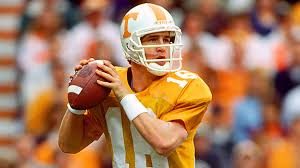 Peyton Manning almost returned to Tennessee back in 2012.

Peyton Manning’s career is over, but he was once almost a Tennessee Titan.  Back in 2012 after the Indianapolis Colts released him he was really considering the Titans, but eventually chose the Broncos. In an interview with the Tennessean’s Jim Wyatt, Manning admitted that he was close to picking the Titans.

“I was pretty close,” Manning said of playing for the Titans, via The Tennessean.

Manning wanted to know if Manning will be coaching his former Alma Mater, but he shot down those allegations as well.

Peyton Manning: “No I will not be coaching QBs at Tennessee, but I’ll be the biggest #Vols fan this year” #MTSA2016

“I’m a huge Butch Jones fan,” Manning added. “I’m excited about the Tennessee Vols and how we’re gonna do this year.”