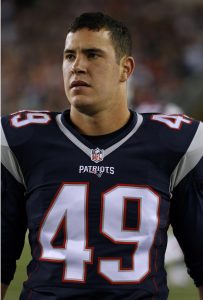 Patriots could be without their longsnapper the entire season

Secretary of the Navy Ray Mabus was on the Dan Patrick Show yesterday talking about Keenan Reynolds and Joe Cardona. Last year Joe Cardona was able to manage working in the NFL and still filling the commitment to our United State Navy.  This is something the Secretary of the Navy Ray Mabus feels can happen this year for former Navy QB Keenan Reynolds who was drafted by the Ravens.  Well when speaking about Cardona this year, it sounds like the Patriots longsnapper may have to take a year of absence to fulfill his commitment to the Naval Academy.

“We’ve got Joe Cardona, long snapper for the Patriots,” Mabus said. “He played last year for the Patriots. While he was on active duty because he was able to work them both out. He’s been assigned to a ship and he’s going to report to that ship. So he may have to leave the Patriots for the year to go fulfill that role.”

The Patriots will likely be looking for a longsnapper this year, who will be a short term player for them.