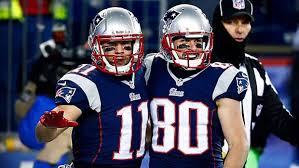 The New England Patriots have always been good at saving money and they shocked me today when I read Ben Volin’s tweets.  Volin of the Boston Globe is saying the Patriots saved a huge chunk of change by the restructured deal of Danny Amendola.

To some players it is about more than just money. Some like to be on winning teams, and that is likely the case with Amendola.