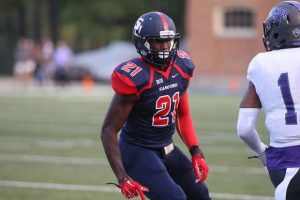 The Carolina Panthers removed their franchise tag from Josh Norman making him eligible to sign anywhere and he chose the Washington Redskins.  He was given a monstrous pay day and it put the Panthers in a pickle.

The Panthers did not panic they went out and drafted three cornerbacks (James Bradberry, Daryl Worley and Zack Sanchez) to come in and compete and eventually try to replace Norman.  Well after the first OTA’s, head coach Ron Rivera is confident in his rookies. He quickly ruled out the idea of signing a veteran cornerback.

“I guess if we did do something it would be later on. But right now we’re set,” Rivera said Saturday. “We’re very happy with what we’ve seen the last two practices with the young guys.”

“The big part of the technique you get from corners is being able to jam, and you can’t do that during OTAs and minicamp,” Rivera said. “So what we’ll be looking for really is the skill sets.”

James Bradberry is a good player and I think he will have the first shot to replace Norman full time.