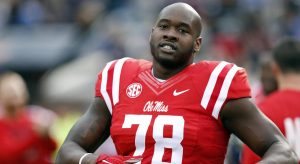 Laremy Tunsil had his accounts hacked during the NFL Draft, where he fell hard and was eventually drafted by the Miami Dolphins. There was a report yesterday from ESPN that Tunsil would not have to enter the league’s substance abuse program, but that is not the truth.

According to USA Today, who spoke with an NFL Official, the decision has not been made yet.

“The reports regarding Laremy Tunsil’s status are inaccurate,” NFL spokesman Brian McCarthy wrote in an email to USA TODAY Sports on Tuesday, confirming what he said Thursday night after Tunsil was drafted.

“Any incoming player with behavior or conduct involving a substance of abuse will be evaluated by the program’s advisors. Those clinical professionals – not the club, league or union – will determine whether based on that evaluation the player should be entered into the program. Neither the club nor the league has a role in that process, and are not notified of their decision.”