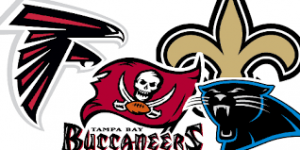 I liked the Buccaneers and the Saints draft pick. I think they did well in the 2015 NFL draft