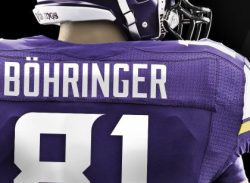 The Vikings announced today that Böhringer has received approval from the NFL to add the umlaut over the ‘o’ in his last name on his jersey.

Böhringer will become the first player to have the umlaut on his jersey.  Pierre Garçon, who is Haitian has a cédille under the c in his name on his jersey, as a rare NFL player with a special character on his jersey.

It is great to see NFL teams sporting jersey’s with the correct spelling for the fans across the world. You can now buy Böhringer’s jersey online in the Vikings store.

NFL Draft Diamonds was created to assist the underdogs playing the sport. We call them diamonds in the rough. My name is Damond Talbot, I have worked extremely hard to help hundreds of small school players over the past several years, and will continue my mission. We have several contributors on this site, and if they contribute their name and contact will be in the piece above. You can email me at nfldraftdiamon[email protected]