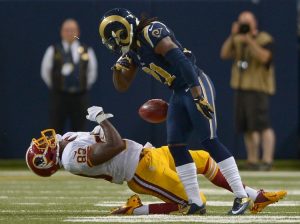 Janoris Jenkins is a New York Giant now and he was paid like a top cornerback in the NFL.  The former small school cornerback that was criticized by the media for having multiple baby mama’s when coming out of college made sure to talk about his situation and how he manages his 5 children.

In an interview with Paul Schwartz of the New York Post this week, Jenkins was asked about having five kids with four different mothers.

“It ain’t a lot,” he said. “It’s just five kids. A lot is something you can’t handle, and I can handle five kids.”

Jenkins, signed a five-year, $62.5 million contract so we all know he can afford the 5 children, but the former Rams cornerback talks about how he manages his baby mamas and his kids.

“I’m a great father,” he said. “I take care of my kids. I do what I got to do. I’m not the guy that’s gonna flash my kids, put ’em out on social media for everybody to see.”

“I called each one of my baby mamas and said, ‘Hey, I’m gonna give you all extra a month. You’re gonna go from this to this. Either you cool with it or you’re not. If you ain’t cool with it, then do what you got to do, you feel me?’ he explained. “I haven’t had any problem.”

Jenkins does a great job with his children obviously because you have not heard about any of them complaining about being a good father.