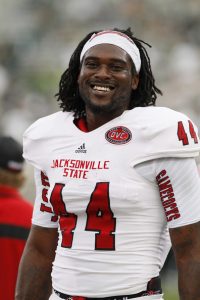 Jacksonville State pass rusher LaMichael Fanning was denied his sixth year from NCAA. He is now a free agent for the NFL

There was hope from Jacksonville State that defensive end LaMichael Fanning would be granted a sixth year of eligibility from the NCAA, but according to Craig Haley the NCAA denied his petition for reinstatement.

Fanning petitioned for the extra year after he missed most of his senior season last year, suffering an ACL tear in JSU’s first game. His team would go on to the FCS Championship to fall short to North Dakota State.

The 6-foot-7, 230-pound Fanning played the last 2 years at JSU after transferring from Alabama where he spent his first three years including a redshirt year.

Fanning is now a free agent and can be signed by any team.