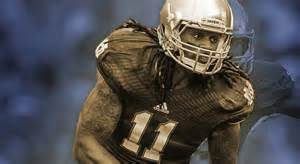 The New York Giants brought in New York City native Ishaq Williams for a workout and according to his social media accounts he made the team.

Williams was brought into the Giants mini camp on a tryout basis, and while many do not usually make it past the three-day camp, Williams made the team.

The one-time Notre Dame lineman/linebacker has not played in roughly two years after being cited in an academic fraud investigation involving five players. Well Williams have defeated the odds.

“I look at the positive side of it,” Williams said, via the New York Daily News. “I still have this opportunity. All that happened and I still have the opportunity to move forward and chase my dream. That’s the way I look at it. It’s hard to be angry when I’m still here, you know?”