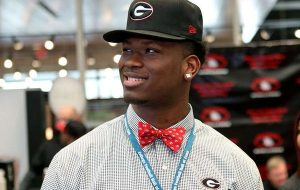 According to Arrest Nation, Georgia defensive end Chauncey Rivers was arrested this week in DeKalb County, Georgia for Felony Violation of Georgia’s Controlled Substance Act, Possession of Less Than an Ounce of Marijuana, Keeping Drugs in a Container, Parking in a Parking Spot Designated for Persons With Disability

Rivers was later released on $2,200 bond. Rivers, 18, was dismissed from the team today.