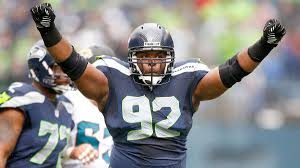 Brandon Mebane is talking out his ears with this statement

Some players are a bit hasty towards their old team when they are not re-signed and that has to be the situation with Brandon Mebane who told reporters today that the Chargers are a more talented team than the Seahawks.

“Offense, defense, there’s so much talent on this team,” Mebane told the San Diego Union-Tribune. “It’s unreal. I was telling guys, there’s more talent on this defense than in Seattle. If you look at the draft, you’ve got four first-round draft picks. You’ve got five second-round draft picks, all total on defense. In Seattle, we only had two first rounders and one second rounder. Everybody else was pretty much down in the draft or undrafted.

“If we put it together and just play together and work on our skill, I think the sky is the limit for this defense. It’s amazing. Based on the skill and the talent level, it’s there. All we have to do is believe in each other and play together. Man, it’s unreal.”

If that was the case than the Chargers would not be drafting in the top 10 every year.  Mebane has to prove this one to me, until then I cannot agree with Mebane.