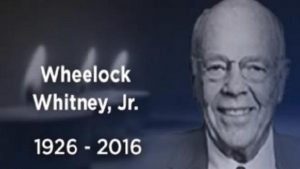 The man responsible for bringing, Major League Baseball, the National Hockey League and the former co-owner of the Minnesota Vikings has passed away.

Minnesota businessman Wheelock Whitney Jr. has died. He was 89 years old.  His son, Ben Whitney, says Wheelock Whitney died Friday at his home in Independence of natural causes. The St. Cloud native was CEO from 1963-1972 of the investment banking firm Dain and Co.

He served on the board of the Twins for 24 years and was a member of the investors group that was awarded an NHL expansion franchise in 1966, which became the Minnesota North Stars. He was also one of 10 co-owners of the Minnesota Vikings who sold the team to Red McCombs in 1998.