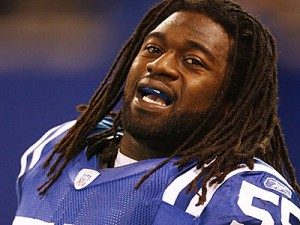 World’s worst dad award is about to go out to a former NFL football player.  According to Fox Sports, Former NFL linebacker Clint Session is facing jail time for “willfully” failing to pay $381,912.63 in child support to care for his 4-year-daughter, who has cerebral palsy and needs constant care, according to court records.

An arrest warrant was issued this week in Florida after Session failed to make the full court-ordered payments to the mother of his daughter. The court found Session capable of making his payments, despite his claims to the contrary.

Session signed a 30 million dollar contract with the Jaguars in 2011. He was given 11 million dollars guaranteed.  He should pay this bill folks.  That is pretty bad.