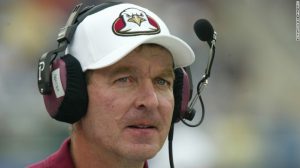 Horton, 58, spent a decade coaching at Boston College and six years at North Carolina State University. He was diagnosed with Parkinson’s disease in 2006 and retired from the football field in 2013.
Horton, who retired after a 30-year coaching career in 2013, was transferred to a hospice facility near the family’s home in Raleigh, N.C., on May 15 after his condition worsened. Ten years after his diagnosis, Horton died surrounded by his two daughters and his wife.
Rest In Peace big man.  I’m sure Jesus needed a good coach up there.
Related TopicsNFLnfl draft Former Boston College head coach Don Horton passed away at the age of 58