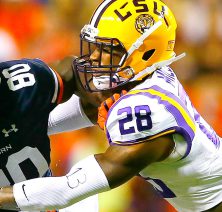 Eagles draft pick Jalen Mills should be quiet, because he is not helping himself

The Philadelphia Eagles drafted several players with red flags and it is already coming back to slap them in the face. Jalen Mills the defensive back from LSU who was drafted in the seventh round by the Eagles, really messed up when talking to Jeff McClane of the Philadelphia Inquirer. He was asked about the situation and Mills really said some dumb things.  People are going to criticize Greg Hardy for his statements to Adam Schefter, but this has to be right up there with Hardy’s responses.

“The girl — basically it was her word vs. mine. Domestic violence is very serious around the [United States], so women, nine times out of 10, they usually get the upper hand until you go to court,” Mills said

“She had witnesses, but I had several witnesses, as well, too,” Mills said. “So we just carried on until the process was dropped.”

According to Pro Football Talk, Mills originally faced one count of second-degree felony assault. The charge later was reduced to misdemeanor assault, a decision that created some controversy in and around Baton Rouge (and which prompted the prosecutor to suggest that the charge wasn’t actually reduced, even though it clearly was). During the preliminary hearing, Mills’ lawyer claimed that the punch had been thrown not by Mills but by his girlfriend.

Mills entered a diversion program not long before the case was set to go to trial in April 2015.

The Eagles may want to lock him in a closet so he doesn’t have to speak to any more media, because his comments are not going to help him.  Mills basically said it was his word versus her word, instead of saying it was a mistake or nothing happened. I am not a big fan of this.