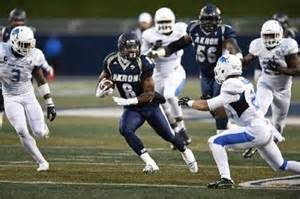 Donnell Alexander declared early for the 2016 NFL Draft. Many know him as Derrick Thomas’ son, but he can play

The Kansas City Chiefs are stacked at running back but the experience to play for the team your in which your Dad was a hero have to mean something.  Donnell Alexander the son of the late great Derrick Thomas worked out for the Chiefs this week and it was a wonderful time for the former Akron running back.

“I have memories (of Thomas), but I was quite young (when he played), so a lot of the memories mostly come from film,” he said, via the team’s official website. “When I was in Colorado, I did a camp, and a lot of people came up and spoke to me, and just the way they said that they idolize my father, to me that was amazing because they have no idea really who he is, but for them to just be die-hard fans like that, that shows me a lot.”

“It’s a surreal experience,” Alexander said. “No matter what, I think I would have come here regardless and at least tried out, because this is where I would love to be — a Chief.”

Alexander is a good back but he will be a longshot to make the Chiefs.  It has to be amazing to dawn the helmet that your father wore.  Good Luck brother, we are proud of you. Here is the interview we did with Donnell pre draft.