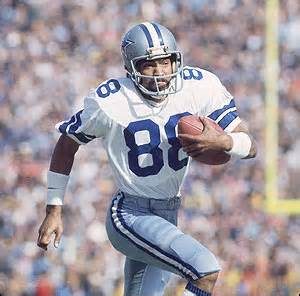 Drew Pearson of the Dallas Cowboys was a pretty solid player. He put up pretty amazing numbers back in his playing days. He actually led the NFL in receptions back in 1976 with only 58 receptions.  So when you look at statistics now and the way the game is played, it would be interesting to see what Pearson could do.

Well in an interview with ESPN Football Today podcast, Pearson says he would be illegal and one of the best players in the league if he played now.

“First of all you’d have to visit me in jail because I’d be illegal,” Pearson said on the ESPN Football Today podcast, via the Dallas Morning News. “They’d say ‘This guy must be illegal. He can’t be getting open like that and catching all those balls, running through the secondary like that without getting touched.’”

“The game was back then you throw 20-25 games, and that was pretty much it,” Pearson said. “I led the NFC in receiving in 1976 with 58 catches, so we didn’t throw the ball much. But with the rules nowadays there’s no question the numbers would have been different because the strategies and game plans and attacking defenses would have been different from what we did back in the day.”

“When I look at these guys going into the Hall of Fame, I look at these numbers they put up, and I was, ‘Wow. I’ll never get in,’” Pearson said. “Some of those numbers triple my accomplishments, the receiving yardage and touchdown numbers that I put up. You wonder if that is something that now is the criteria, the quantity of catches as opposed the quality. The catches I made were quality catches. I only had 489 in 11 years, but I averaged 16 yards a catch. So let’s define greatness by the eras that these individuals play in.”

What do you think? Do you remember Pearson? If so would he be illegal?