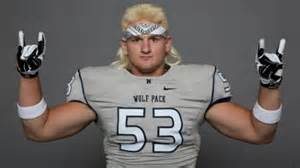 Listed at 6-foot-3 and 305 pounds, Teofilo made 40 straight starts for the Sun Devils and recorded 43 reps in the 225-pound bench press at his March pro day.

The Chargers waived guard Sebastian Johannson, an undrafted rookie guard from Marshall, in a corresponding move. They also waived-injured linebacker Brock Hekking, the team announced Monday. Hekking suffered a foot injury last August in a preseason game against the Seahawks.