#Cardinals WR Larry Fitzgerald fulfills his promise to his mother; Graduates from college 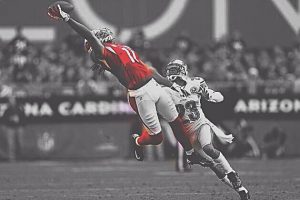 Larry Fitzgerald may be one of the best wide outs to ever put on a uniform, and while he has broken many records and accolades, he still had one goal he had not yet accomplished.  Fitzgerald made a promise to his mother that he would graduate from college.  Well Fitzgerald has made that happen now.  A week after Mother’s Day, Larry Fitzgerald received his degree.

“Fitz left the University of Pittsburgh after his sophomore season to pursue the NFL and put his college education on hold. Though he’s become one of the best wide receivers in the NFL in that period, he never forgot the promise he made to his mother while he was at Pitt the first time.”

Fitzgerald’s Mother Carol told Larry this before she sadly passed away: “Education is one thing nobody can ever take from you. I know you have a passion to play ball, but education is something you can carry for the rest of your life.”

He graduated from the University of Phoenix majoring in communications and minoring in marketing.

This is a pretty cool story.  Congrats Fitz, you have always been a good player and a great person. I am sure your Mother is in Heaven smiling and telling everyone that’s my boy!!!