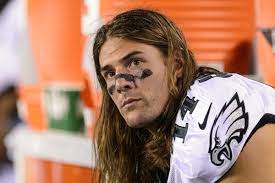 Riley Cooper should be on a roster

The Buffalo Bills wide receiving group is not very impressive on paper, and to be honest the team lost a very reliable player in Chris Hogan.  Hogan was signed to a mega offer sheet by the New England Patriots, which the Bills could not match.

The Bills did draft a wide out in Kolby Listenbee but he is very similar to Percy Harvin and Marquise Goodwin who may not be on their roster this year. The Bills still have Sammy Watkins, and Robert Woods who are locks on the roster, and the rest of the guys are a bunch of weak links trying to make the team.

To be honest the Bills only have three legit players at the wide out position who we can kind of lock in as guarantee to make the roster. Those players are Sammy Watkins, Robert Woods and draft pick Kolby Listenbee.

After that what do the Bills have?  They have a bunch of nobodies.  The Bills could use a veteran guy to come in and help with their offense. The Bills GM was already asked about bringing in Anquan Boldin, but his price tag could be too much. So why not bring in Riley Cooper?

Cooper finished the 2015 season with 21 receptions off 41 targets for 327 yards and 2 touchdowns. There were several games that Cooper did not receive a catch last season, but he is a better option in my opinion than the other players on the roster, and could be had likely at a cheaper rate. Cooper is 28 years old and 6’4, he could be a good red zone target for Tyrod.  Shoot at league minimum, why not try it?