Buffalo Bills were planning on taking Reggie Ragland in the 1st round, but were able to land him in 2nd 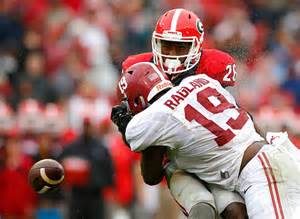 According to my cousin and writer for Buffalo Football Report Ryan Talbot, the Buffalo Bills had 19 players on their big board with a first round grade.  The Bills were hoping to land Reggie Ragland at pick 19 according to Doug Whaley, but the team decided to take a player that was rated higher in Shaq Lawson.

This is what Bills GM Doug Whaley said to  WGR-550 about the situation:

“I told the Pegulas this rarely happens like this,” said Whaley. “To be able to have the highest guy on your board… these guys truly filled our needs. To have Ragland there in the second round, where we were thinking that Shaq (Lawson) would be gone in the first round and we were targeting Ragland as our 19th pick, so for us to feel like we got two first rounders in the first two rounds and knowing they’re going to be starters due to need it’s a special draft. Hopefully it turns out years down the road that this was the draft that propelled us to where we want to go.”

The Bills did well in the first two rounds and I was able to breathe a bit easier when they took Ragland in the second round. I really wanted Ragland so it worked out well.