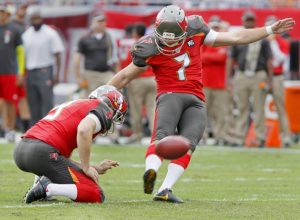 The Tampa Bay Buccaneers have released small school kicker Patrick Murray. Murray made 20-of-24 field goals and all 31 extra points he tried during the 2014 season, but was waived/injured before the start of last season and wound up on injured reserve after going through waivers unclaimed.

Murray, 24, signed on with the Buccaneers on a future/reserve back in January of 2014.