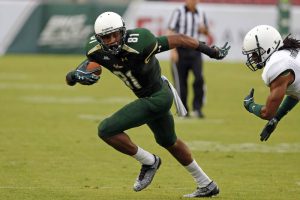 Former USF WR Andre Davis has been signed by the Buccaneers

According to Greg Auman of Tampa Bay Times is reporting the Buccaneers made several moves to the bottom of their roster.  According to Auman, the Bucs re-signed former South Florida wide out Andre Davis, as well as DT Travis Britz, LB Micah Awe and OL Kelby Johnson.

Andre Davis really shocked me in the preseason last year with the Buffalo Bills. He was a solid player that really had a great preseason. He had several big plays in Buffalo but just has not stuck on a roster. He is a very solid player though.