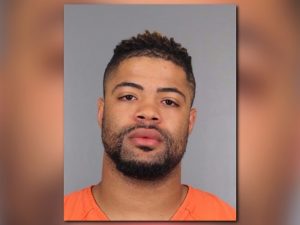 Broncos wide out Cody Latimer was arrested after he called police

Denver Broncos receiver Cody Latimer was getting beat up by his girlfriend and called the police to help him, yet it ended up biting him in the butt.

According to the Colorado Bureau of Investigation records, the Arapahoe County Sheriff’s Office arrested Latimer after it was discovered an outstanding warrant had been issued to him by Denver traffic court after he was cited March 18, 2015 for improper lighting on his vehicle/trailer.

Latimer, 23, didn’t show up for his court date on April 29, 2015 on what would have been a minor traffic ticket. Instead, Latimer wound up in Arapahoe County Jail on Monday night and paid $311.50 to settle the matter on Tuesday, according to Mike Klis of Channel 9 News.

This happened after he called the police for help because his girlfriend “put her hands on him.” His girlfriend, Jaimee Rando, 25, was arrested by Denver police for assault and disturbing the peace. Records show Latimer bailed out Rando on Tuesday afternoon. You have to give him a hand. I mean he could have hit her back.  He obviously loves his job.