#Broncos new RB Devontae Booker says he is not in Denver to carry pads, but rather take someone’s job 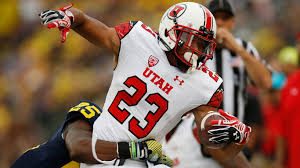 Devontae Booker wants to be the man in Denver, and he plans on taking over the position

Devontae Booker the recently drafted rookie from Utah, was very open to the media when it came to his role with the Broncos.

“My message to Broncos fans is I want to be one of the best running backs to come out of Denver,” Booker told NFL Media on Thursday during the NFL Players Association Rookie Premiere in Los Angeles. “I’m not there to carry pads. I’m there to take someone’s job.”

That position he will have to take is that of C.J Anderson who was given a nice little pay raise.  The Broncos starting back C.J Anderson did not get upset by Bookers’ comments. He was actually pretty fine with it.

“What do people want him to say?” Anderson told Mike Klis of Channel 9 News. “It doesn’t matter what he says. I know what I can do. I know what I can do in this league. He’s coming in with confidence and he’s supposed to. I don’t have a problem with what he said. I said the same thing when I came in undrafted.”