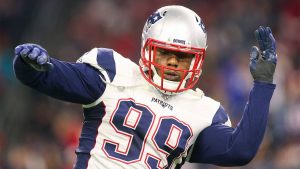 According to Jeff Howe of the Boston Herald, former first round pick Dominique Easley, worked out for the Bengals recently. Howe reports Easley has also worked out for other unnamed teams and Falcons coach Dan Quinn said that he’s spoken to a player he coached at the University of Florida.

Former Patriots first-rounder Dominique Easley has had a couple workouts with teams, including one with the Bengals, per source.

Easley was recently released and there were reports that he was a bad teammate.  Well he is still getting a look, according to Howe.
Related TopicsBengalsbengals draft prospectbengals draft rumorsbengals rumorsbengals transactionsnfl draft bengals