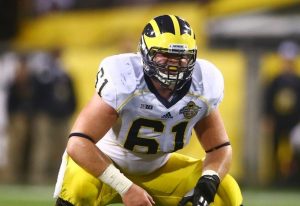 Bob McGinn of the Milwaukee Journal is one of the best follows during the NFL Draft. He always talks to NFL scouts and gets a break down of most of the top tier prospects.  Here is what Bob wrote about the top 3 offensive guards in the the 2016 NFL Draft. If you want to read about the other prospects you can do so by reading here:

1. JOSH GARNETT, Stanford (6-4 ½, 313, 5.29, 2): First Outland Trophy winner in school history. “He’s the best guard,” said one scout. “Little bit like (Mike) Iupati. Little stiff but real physical. He’s big enough to hang in there against those big 3-techniques.” Two-year starter at LG. “He’s not perfect by any means but you can see the power,” another scout said. “He’s a better athlete than I anticipated. He wouldn’t be a good fit in a zone scheme.” Father, Scott, was an NFL DT from 1984-’87. “I just don’t think he moves very well,” a third scout said. “Just upper body. Very similar to the guy there a couple years ago that didn’t make it. David Yankey.” From Puyallup, Wash. “What makes him is he’s the emotional, vocal leader,” a fourth scout said. “Powerful, strong hands (10 1/8), nice feet on pulls. Will overextend at times.”

2. CODY WHITEHAIR, Kansas State (6-4, 301, 5.07, 2-3): Four-year starter generally played LG from 2012-’14 and then LT as a senior. “He played left tackle but no chance there,” said one scout. “Has to be a guard or center. More of an overachiever athlete. Just kind of a guy.” Has been compared to former Bengals G Eric Steinbach. “Very steady, technically sound,” a second scout said. “Always in great position. Great balance, great feet. Plays with really good leverage. Doesn’t have ideal arm length (32) but knows how to play.” His 16 reps on the bench were the lowest of any guard. “He’s got to get stronger in the upper body,” a third scout said. “But he’s got really good lower-body strength and knows how to use his hands. He’s got edge and a lot of intangibles.” From Abilene, Kan.

3. GRAHAM GLASGOW, Michigan (6-6, 307, 5.15, 2-3): Of his 37 starts, 30 were at center, four at LG and three at RG. “He just blocks people,” said one scout. “He’s big and he gets on people and he blocks ’em. Maybe a little upright in his play but he’s pretty good. He had the (alcohol) incident but they say he’s been all right.” Hit with a DUI in 2014 but then violated probation by drinking again and was suspended last spring. “His person scares the crap out of me,” another scout said. “But this guy is a real player, plus he’s 6-6.” Walk-on from Aurora, Ill. His brother, Ryan, is the Wolverines’ starting NT. “Really a good technician,” a third scout said. “Could play any position he wants. Because of his height he gets pushed some initially because these smaller guys get leverage on him. But he’s so strong in his lower body that he settles. For a tall guy he’s quick to the second level. He’s smart (Wonderlic of 34). Hopefully, he’s smart enough to stop drinking.”