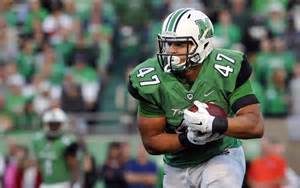 Devon Johnson did not do very well on his Wonderlic test, but he is a bruiser

The NFL Draft is approaching and NFL Scouts have been talking to Bob McGinn of Milwaukee Journal does a great job at breaking down the NFL Draft, by talking to scouts.  Here is what the scouts said about the top full backs in the NFL Draft.

3. ANDY JANOVICH, Nebraska (6-1, 238, 4.77, 6-7): Didn’t start until senior year. “I don’t know if he can play fullback, but he had a nice game against Southern Mississippi,” said one scout. “He had like 100 yards in three or four (touches). He’s quick and made some nice little adjustments, and he runs hard and he catches the ball well. He’s quick as a lead blocker but he doesn’t have the power to lead through. I still wouldn’t draft him but I’d bring him in as a free agent.” Carried 45 times for 271 (6.0) and three TDs and caught five for 87. Wonderlic of 29. From Gretna, Neb. “Not a bad blocker,” another scout said. “Not real big.”