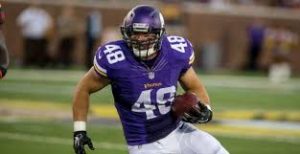 Today the Minnesota Vikings rewarded their fullback. The player that paved the way for Adrian Peterson to a rushing title in 2015 with 1,485 yards. The Vikings announced on their Twitter that Zach Line has been re-signed.

1 hour ago – View on Twitter
We have re-signed @ZLINE48

Line has appeared in 20 career games making six career starts in the first three years of his NFL career. The Southern Methodist standout started a career-best five games during the 2015 campaign and scored his first three NFL TDs, with two rushing TDs and one receiving TD. Line finished the 2015 campaign with 10 yards rushing and two TDs on six attempts and added 103 yards receiving on seven catches with one TD through the air.