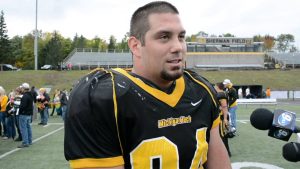 I played for Michigan Technological University in the GLIAC

The coolest thing I have done off the field would be any community service where I was able to work with youth and teach my craft. They really look up to you and are there because some day, they want to be where I am now.

The hardest college class that I took would have to have been Applied Portfolio Management Program (APMP). My teammates and I managed $500,000 of the Michigan Tech Endowment Fund and made our own investment decisions in order to generate a return.

Well growing up I looked to Brett Favre and his toughness along with Reggie White. As I continued to get older, I would gain more relationships that I would consider role models such as coaches and older teammates. All of these people have built me into the person that I am today.

I played basketball up until my sophomore year, and baseball through my senior year.

My toughness, football IQ, motor, and perseverance. I broke my right fibula in week six of my RSophmore year before the half and finished the game. Then, week six of the following year, I broke my fibula again where I started and finished the remaining four games of the season and our playoff game. Based on my football IQ and film study, I was able to do diagnose play before they happened and my motor will speak for itself. I have persevered through so many obstacles to have the opportunity I have now, and I will continue to do so.

Well start with formation, and based on the break down provided by the coaching staff, we can determine the plays that are a possibility. Then I can look at where the back; how deep is he, is he behind the tackle or the guard, and is it the teams running back or full back. Then I will look at the lineman; is he heavy of light in his stance, what are their splits, and is he looking at the guy he is suppose to block.

I would have to say the center from Grand Valley State, Armstrong, my RSophmore year.

I would like to be compare to JJ Watt being able to play the whole defensive line, however I never got the opportunity to play on the edge. He is always disruptive and in the backfield. He is one of my role models, he has a great attitude, work ethic, and toughness. He had just come out and said that he was playing with five torn core muscles and I can honestly say I would do the same thing. It would be great to meet and possible train with him to see what a day in his shoes would feel like.

As I have said before, I broke my fibula twice. The first time was a process because I was told it would heal on its own, however it didn’t do that. The muscle wasn’t allowing the bone to move back into place because of the impact of the hit I took. So then I had to go in and get a plate. That took more time out of training and was finally able to rehab in the summer and get ready for football. However it took some time for my legs to get into shape, but I broke my leg again during the season. This time it wasn’t going to sideline me. I had to wear a protective custom cast during games that I would cover with a long sleeve that I cut of my shirt so no one would notice. I was limited some with certain movements but I wasn’t going to miss more games due to it. At the end of the season I had to go in and get it fixed again, rehab again, and in the summer we thought it would be a good idea to take it out, and then rehab some more. I was finally healthy for my senior season and I couldn’t have been more thankful.

I always listed to the same playlist that I have, but beside that nothing special.

My biggest strength I would say is my strength as well as football IQ. The game is easy when you know what’s going to happen

My biggest weakness is my consistency. I would say that I played down to the level of my opponents at times and that’s something that simply can’t happen and won’t happen when I get a chance at the next level.

The GM will be able to tell by the look in my eyes. I will do anything and everything to be a better player, whether it is extra film study, knowing the entire defensive line playbook and my flat out work ethic.

I had mentioned before Brett Favre and my team was the Green Bay Packers.

I would love to meet Mean Joe Greene, (who was my defensive line coach’s mentor) Reggie White, and JJ Watt

It won’t be anything I buy, it will be the debts that I have accumulated from the friends and family that have helped me get where I am today.