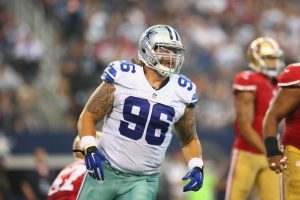 The Seattle Seahawks hosted former Dallas Cowboys defensive lineman Nick Hayden for a workout, according to Sheil Kapadia. Hayden was selected by the Panthers in the sixth round of the 2008 NFL Draft. He played college football at the University of Wisconsin.

The Seahawks had veteran defensive tackle Nick Hayden in for a free-agent visit today, per a league source. Hayden spent the last three seasons with the Dallas Cowboys, starting 47 games. He previously spent time with the Cincinnati Bengals and Carolina Panthers. If signed, the 30-year-old Hayden would likely get a chance to compete for the starting nose tackle job, or he could provide depth as part of the rotation.