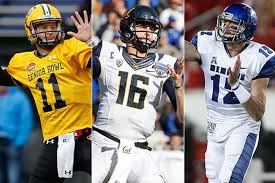 What are NFL scouts saying about the top 3 players in the draft?

Bob McGinn of the Milwaukee Journal does an amazing job every year of gathering intel from around the league, regarding certain players, and here is his breakdown of the top quarterbacks in the draft from the scouts mouth.

McGinn broke down more than just the top three, but this is a very good read. You can read what was said about all the quarterbacks here.

1. JARED GOFF, California (6-4, 217, 4.78, 1): Third-year junior. “Extremely accurate,” one scout said. “Amazing feet and pocket presence. Very similar to (Tom) Brady that way. Can make all the throws. But he has such a slight build. He needs to get stronger. And having played in that spread system he will need to take snaps under center and make adjustments.” Started all 37 games of his career, compiling a 14-23 record. “He was surrounded by nothing,” another scout said. “His best running back had a hip and was hurt all year, the receiver has all kind of talent and he’s a nut job. The rest of them are pedestrian. He might be the most ready but I’d be nervous taking him before 10. Thing I don’t like is his slender build.” Finished with a passer rating of 98.9. Another Cal product, Aaron Rodgers, posted a two-year rating of 102.9 in 2003-’04. “I just don’t see him having that winner quality about him,” a third scout said. “His arm isn’t great. They do a lot of that dink and dunk offense, a lot of that false production. He gets rattled by pressure. Everything has kind of got to be under control for him. He couldn’t win there and you want him to be the face of your franchise?” From Novato, Calif. Small hands (9 inches). Scored 34 on the 50-question Wonderlic intelligence test.

2. CARSON WENTZ, North Dakota State (6-5, 237, 4.69, 1): “Prototypical,” one scout said. “I see everything. Arm strength. Accuracy. Toughness. Athletic ability. Smart. Great kid.” “He’s a genius, Wentz is,” said another scout with knowledge of Wentz’s 40 on the Wonderlic. “He could be really good. He’s the best runner, he’s the best athlete. He is off the charts.” Fifth-year senior from Bismarck, N.D., who didn’t start a game until his fourth year. Finished with passer rating of 105.3. “He gets away with things in that league (Missouri Valley) that he wouldn’t get away with in the SEC,” a third scout said. “He tries to throw in tight windows. Even in the (FCS) title game he threw two picks. The guy he reminds me of is (Blake) Bortles. Everybody was so excited about Bortles because of the height and the athletic ability, and this guy has the same thing. At least Bortles played against big-time competition. At this point I just don’t see where he’s that accurate of a passer.” Compared by that same scout to Ben Roethlisberger. “He’s big, athletic and has a freaking cannon,” a fourth scout said. “Level of competition is the only thing. I’d sit him for a year and a half, two years. Then I got a real starter. He’ll be shoved into the fire too quickly and it may crush him.”

3. PAXTON LYNCH, Memphis (6-6 ½, 246, 4.83, 1): Fourth-year junior. “He’s the guy I like,” one scout said. “He’s got the poise, the vision. You can see what Memphis has done since he’s been there. Guy beat Mississippi and put Memphis on the map. Good athlete. Got all the things I look for in a guy.” Only other offers out of Deltona, Fla., were from Florida A&M and Bethune-Cookman. “For a tall guy he doesn’t act like (Dan) McGwire or somebody,” another scout said. “He can get out of trouble. He can run. He can make all the throws. Accuracy is good, not great. Just give him a minute … but Jacksonville gave (Blake) Bortles only four games.” His 36-inch vertical jump tied Cardale Jones for best effort among QBs. His passer rating of 93.5 included 110.6 in ’15. “You might hit the home run with Lynch but because of the mental you might strike out,” a third scout said. “He has the best arm. It ain’t even close. That big, tall son of a gun can run, too. He’s a little spacy, a little different.” Added a fourth scout: “The overall maturity level and disposition, I’d be a bit concerned. Big kid, strong arm. But he’s a ways away mentally.” Wonderlic of 18.

I like this breakdown, and the final quote from the scouts make you wonder. Did the Browns know something more than us?