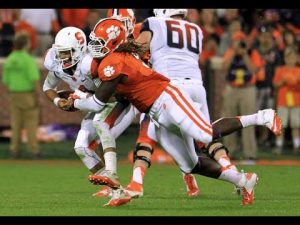 The New Orleans Saints made a roster move today which was a little odd. Tavaris Barnes who made the Saints roster as an undrafted free agent in 2015, was released today by the team.

Barnes is a Jacksonville, Florida native who attended Clemson University from 2010-2015 where he played DE/DT.

Barnes had 64 tackles, 9.5 tackles for loss, five sacks, 14 quarterback pressures, two pass breakups, one caused fumble and two recovered fumbles, including one for a touchdown, in 881 snaps over 47 games (four starts) in his career at Clemson.

The team also released former 5th round pick Vinnie Sunseri out of Alabama.