Ryan Fitzpatrick needs to bet on himself

Ryan Fitzpatrick has been holding out from the New York Jets because he wants a pay raise, but I think that Fitzpatrick is doing it all wrong.

Right now the Jets need Ryan Fitzpatrick, they are trying to play the waiting game, but if I was the Harvard graduate, I would play a different game. I would play Russian Roulette with them.

Here is how I would make my contract, I would give them a low base salary like 10 million a year which is very cheap for a starting quarterback in the league. Robert Griffin III is getting 7.5 million a season and he has not played in the past two years.  So I would demand a base salary of ten million a year. Then I would structure my contract like this.

If Fitzpatrick throws for 3000 yards he will gain another 1 million dollars, if he throws 24 touchdowns then he receives another bonus. Fitzpatrick can be very smart in how he works out his deal. He can bet on himself, and the reason I am stating that he should do this is simple. Fitzpatrick has played four of his 11 years under Chan Gailey, and those four years were his best ever as a quarterback in the National Football League. Fitzpatrick is a great system quarterback, and he need to understand that he can hit those numbers again.

Fitzpatrick was with the Bills from 2010-2012, in which he dominated and received a huge contract.  Then look at his numbers from last year. 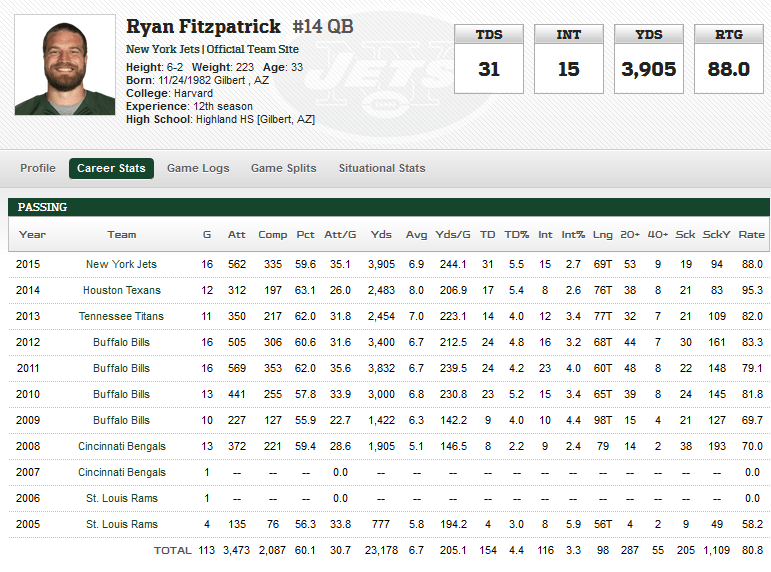 If I am Fitzpatrick’s agent, I bet on the stats.  I think my client would meet the expectations.