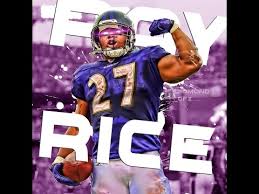 Ray Rice is being black balled by the NFL, it is very clear, and now his chances of ever playing another down is in jeopardy.  According to Jason La Canfora of CBS Sports, the former Ravens back needs to consider the Canadian League may be his only option.

Still no buzz whatsoever for Ray Rice, and with the draft approaching things will probably remain bleak for him. If I was advising him, I’d give the CFL a shot and try to show what I can do there.

Given the fact that NFL owners have essentially blackballed him because his crime was caught on video, I’d imagine it would take him performing at an incredibly high level up there to get another shot here. At this point if he still wants to play football as much I hear he does, and if he’s in playing shape, as I hear he is, then Canada might be his only option.

I am a very big fan of the CFL and agree with La Canfora that Rice should try his hand with the CFL.