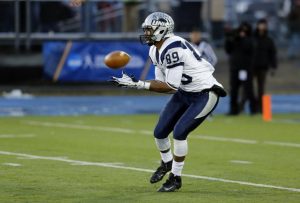 Spears, who played his college football at New Hampshire, was signed to the Ravens’ practice squad last December.