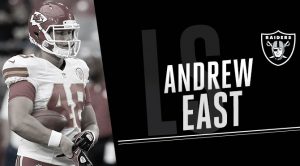 The Oakland Raiders announced Tuesday that they have signed free agent LS Andrew East to a contract. East, a first-year player, originally signed with the Kansas City Chiefs as an undrafted free agent in May 2015 and spent training camp with Kansas City. Following the conclusion of the 2015 season, he signed with the Seattle Seahawks as a reserve/future free agent in February of this year before being waived in March.

The 6-foot-2, 220-pounder snapped in all 51 games of his collegiate career at Vanderbilt and recorded 13 special teams tackles.