Could the #Raiders release CB D.J. Hayden before the start of camp? 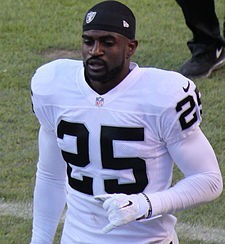 Could the Raiders move on from D.J. Hayden?

The Oakland Raiders were hoping for big things from D.J. Hayden but he has not been a very good cornerback in the NFL.  Hayden played college football for the University of Houston. The Raiders selected him in the first round (12th pick overall) of the 2013 NFL Draft, and now he could be without a job soon.

According to Paul Gutierrez of ESPN, many believe that Raiders former first round pick D.J. Hayden may not be on the team when training camp begins.

It starts and ends with cornerback D.J. Hayden, about whom questions have already surfaced as to whether the former first-round pick even makes it to training camp on the Raiders’ roster. Drafted at No. 12 overall in 2013 despite having nearly died on the practice field the previous fall, Hayden has had a rough go of it in his first three NFL seasons. The defensive back who gave the Raiders visions of Mike Haynes has just three interceptions in 34 games.

Sometimes draft picks do not pan out, but so many people were high on Hayden, so it makes you wonder if he has just lost his confidence, or his near death experience has prohibited his no fear attitude on the field.

Related articles across the web