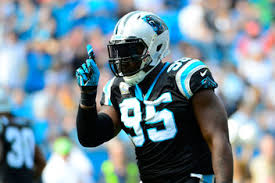 Charles Johnson is returning to Carolina

Charles Johnson played college football for the University of Georgia and was drafted by the Carolina Panthers in the third round of the 2007 NFL Draft. Since 2007, Johnson has racked up 63.5 sacks and been a locker room leader.  This year the Panthers released Charles Johnson and he had an opportunity to rake in tons of money, yet that is not what Johnson wanted.

Johnson recently told ESPN.com’s David Newton that he nearly fired his agent Drew Rosenhaus over the new contract because the agent was trying to “max out” with a different team.

“He was just shocked because you’re leaving this money out on the table,” Johnson said. “Like I told him, I just bet on myself.”

Johnson suffered a serious hamstring injury,  and while he managed just one sack in nine games last season after averaging 10.5 over the previous five seasons. He knows he’ll have to hold off competition for his job while auditioning for a bigger contract next off-season.

“Why wouldn’t I want to sign with somebody that I feel comfortable with, that has done everything for me?” Johnson added. “Now I can go out, give it my all, don’t have to worry about money, don’t worry about nothing. Just go out and play ball without worrying about that extra stuff. They can’t call me “big money” anymore.”