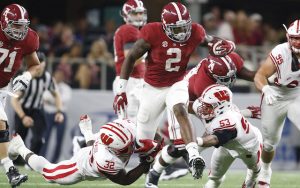 Nick Saban has been producing running back prospects left and right but this stat according to NFL.com is insane. Only Eddie Lacy has ran for 1000 yards.

If Derrick Henry and Kenyan Drake are both drafted then it will mean 8 running backs have been drafted from Alabama under Nick Saban…..WOW.

Derrick Henry and Kenyan Drake are expected to become the seventh and eighth running backs drafted from Alabama in the Nick Saban era. Of the previous six, only Eddie Lacy has ever rushed for 1,000 yards in a season. T.J. Yeldon, Jalston Fowler, Trent Richardson, Mark Ingram, and Glen Coffee have never done so.