Could Oklahoma State DE Emmanuel Ogbah slide to the third round 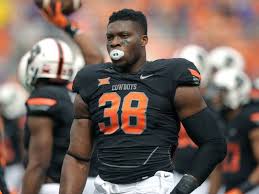 Could Oklahoma State defensive end Emmanuel Ogbah slide out of the first round?

Could Oklahoma State defensive end Emmanuel Ogbah be sliding down draft boards? According to NFL.com’s Lance Zierlein, three NFL teams have confirmed the possibility of a huge draft day slide.

It sure sounds like a huge fall for a guy that has tons of interest.

Don’t be shocked if Ogbah slides all the way into the third round. Three teams have confirmed that possibility to me.