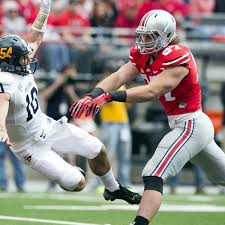 Joey Bosa will not play for the Ravens

According to Baltimore Beatdown, Joey Bosa is not a fan of the Baltimore Ravens. According to the report, Bosa stated that if the Ravens draft him he will hold out.

Joey Bosa has come forward saying, “I will hold out if drafted by the Baltimore Ravens”. A huge blow to what could be a great pick-up in the 2016 NFL Draft.

According to multiple sources a big reason for the hold-out involves John Harbaugh’s brother, Jim, and coaching the Michigan Wolverines. Apparently the rivalry stems even to the professional level.

This is huge news because many draftniks and mock drafts have Bosa going to the Ravens at the sixth pick in the draft.

Guys it was an April’s Fool joke, and maybe the best on the net. Had Yahoo Sports and us fooled…..