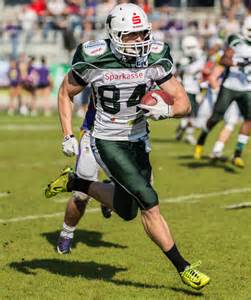 GFL wide out Moritz Boehringer should be drafted and if he is not, NFL teams are making a mistake

The German Football League has been pretty popular in the NFL over the past couple months. It all started with a former small school wide receiver named Tyler Davis getting signed by the Miami Dolphins. The former Kiel Baltic star wide out was a versatile player that was able to play both sides of the ball and add to the Hurricane’s special teams as a return man.  After Davis was signed several players from the United Kingdom, France and Germany were all getting looks.

Osi Umenyiora and Aden Durde set up a program to help players from overseas get here in the United States to help them players get a shot in the NFL. Players like Harry Innis the 6’7 tight end from the United Kingdom, and Anthony D’able the standout from France were both brought here to the states to work out in front of NFL teams.  Another player that came to Boca Raton, Florida to train with Tony Vellani was a young kid from Germany. His name was Moritz Boehringer.

Boehringer was only 22 years old, he had 0nly played American football a couple years, but he found out last year in Germany he was really good.  He was named GFL Rookie of the Year, after catching 70 receptions for 1461 yards, and scored 16 touchdowns. The most impressive thing was his average per reception.  He averaged 20.9 yards per carry.  While the German Football League is not considered the best talent, this 6’4, 227 pound pass catcher is making NFL teams drool over his abilities. Look at how Boehringer’s numbers compare with the players coming out in the 2016 NFL Draft.

Boehringer created a buzz at his pro day at Florida Atlantic University last week, recording a 40-yard dash time (on grass) between 4.38 and 4.45 seconds. NFL teams were blown away, they wanted to know who this kid was.  Boehringer really dominated Germany, and NFL teams wanted to learn more about him. After his pro day Boehringer had 7 workouts scheduled to attend all around the United States. Boehringer will hold another pro day at FAU for NFL teams interested, and the list of people that are interested is overwhelming. This kid is the talk of the NFL right now.

If Boehringer is drafted, he will be the first player ever drafted out of Germany that never played snap here in the United States. History will be made, and I am pretty sure some team will fall in love with him and Draft him. If they don’t they are making a mistake, because you cannot teach natural speed and skills.  He has not even reached his full potential.