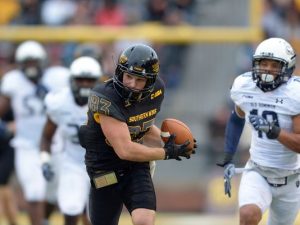 There are many good wide receivers in the 2016 NFL Draft, but there is not one better at route running that Casey Martin of Southern Mississippi.

Casey Martin makes defenders look stupid on his routes. That is a good route runner to me. He is getting separation with ease

Martin is a kid we have been pumping for the past couple months and now his video is going Viral. The 5’10, 190 pound slot wide out made a highlight video of himself running routes and he is straight up murdering his teammates in drills. It is players like this that make an NFL roster, and he needs to get a little more attention than he is getting.

I want my followers to see the video for themselves.  What do you think? Would you want this guy on your team?