#NFL has suspended RB Silas Redd has been suspended indefinitely 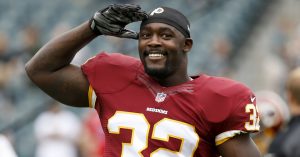 Silas Redd Jr. has been suspended indefinitely by the NFL

#Redskins RB Silas Redd is suspended indefinitely for violating the NFL Policy and Program for Substances of Abuse. It begins immediately

He hasn’t played since the 2014 season, when he carried the ball 16 times for 75 yards and a touchdown.