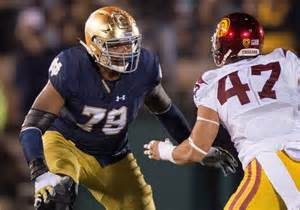 Ronnie Stanley is not a grinder?

Bob McGinn of the Milwaukee Journal is one of the best follows during the NFL Draft. He always talks to NFL scouts and gets a break down of most of the top tier prospects.  Here is what Bob wrote about the top 4 offensive tackles in the the 2016 NFL Draft. If you want to read about the other prospects you can do so by reading here:

1. LAREMY TUNSIL, Mississippi (6-5, 312, 5.05, 1): Third-year junior compared by one personnel executive to Hall of Fame LT Walter Jones when he declared early in 1997 after playing one year at Florida State. “Extremely athletic,” he said. “Good kid. About the same as Tyron Smith. He has a chance to be in a bunch of Pro Bowls.” Started 26 of 29 games at LT, missing the first seven games of 2015 because of NCAA benefits violations. “He’s probably the most athletic guy that’s come out in a while,” another scout said. “He’s not 100% clean with his game. He needs more strength, a little more nastiness. But as far as movement, he’s pretty elite.” Arm length (34 ¼ inches) good, not great. Ditto for hand size (10), and scored 15 on the 50-question Wonderlic intelligence test, the lowest of the top 10 tackles. Not one scout, however, expressed reservations about Tunsil’s ability to think on his feet. “Very similar to D’Brickashaw Ferguson,” a third scout said. “I didn’t see him as dominating because he must get stronger to handle big, physical edge guys in the run game. The Orlando Paces, the Joe Thomases are rare, but that’s the definition of a dominating player.” From Lake City, Fla.

2. RONNIE STANLEY, Notre Dame (6-5 ½, 315, 5.21, 1): Fourth-year junior with long arms (35 5/8) and big hands (10 5/8). “Not as athletic as Joe Staley but he’s a top-10 pick,” one scout said. “Outstanding natural skill set. Mentality is somewhat questionable. He’s not a grinder, but let’s not kid ourselves. He’s a good player … a complete tackle.” Started at RT in 2013 and at LT past two years. “Not a lot of miss there,” said another scout. “Smart (Wonderlic of 27), athletic, has size, can protect on the left side. You just wish he had a little more grit to him.” Replaced Zack Martin at LT two years ago. “He’s probably a better athlete than (Jack) Conklin but Conklin is a lot tougher,” a third scout said. “He’s got great feet but every game he gets a couple of motion penalties. The problem is just consistency. More of a pusher than a striker.” From Las Vegas.

3. JACK CONKLIN, Michigan State (6-6, 309, 4.99, 1): Fourth-year junior played for his father at Plainwell, Mich., where he made honorable mention all-state and walked on. “Kind of a self-made guy who kind of grew into his body,” said one scout. “He played left there and can probably survive there, but eventually I think you’ll want a better athlete.” Other scouts argue that he’s more than athletic enough for LT. “For the third tackle off the board you’re going to get a great pick,” said another scout. “He’s better than (Eric) Fisher when Fisher was the first pick (in 2013). He’s better than (Luke) Joeckel. That was a horrible draft.” Aggressive style of play compared by other scouts to that of Bengals Pro Bowl LT Andrew Whitworth and Green Bay RT Bryan Bulaga. Arms were 35, hands were 10 3/8 and Wonderlic was 29. “The more you watch that guy, he’s the entire package,” another scout said. “What he ran (4.99) shocked the heck out of me. He might end up being the best (tackle) because he’s so tough. I’ve got nothing negative about him. Whatever he does, I think he gives you 100%.” Made 35 of 38 starts at LT.

4. TAYLOR DECKER, Ohio State (6-7, 311, 5.21, 1): Won Big Ten Offensive Lineman of the Year honors over Conklin. “Just a man’s man,” said one scout. “Wins you over with his leadership. You could see this guy running for Congress some day. He’s like Jon Runyan. I’d move him to right tackle. I don’t know if he has the feet for that (LT).” Started at RT in 2013 and at LT in 2014-’15, consistently kicking butt and taking names. Arms (33 ¾) below average for his height. “Bust potential,” said another scout. “Big man, average athlete.” Won’t turn 22 until August. Wonderlic of 36. From Vandalia, Ohio. “I’d stick him right at left guard,” a third scout said. “Alex Boone did it (at that height). He’ll come in and be your starter right away.”