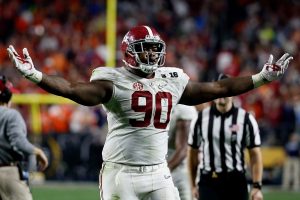 Bob McGinn is one of the best writers to follow during the draft, and his Draft Review piece is full of amazing information. McGinn talked with NFL scouts and his report is awesome.  You can check out the other defensive tackles here in his piece, but this is what the scouts said about the top defensive tackles in the draft.

JARRAN REED, Alabama (6-3, 309, 5.16, 1): Played two years of junior college and started two years for Crimson Tide. “Probably the best run defender in the draft,” said one scout. “Excellent hands, leverage. It’s textbook, training-reel tapes.” Finished with 112 tackles (11 for loss) and 2 sacks. “He could play nose,” another scout said. “Had a hell of a Senior Bowl game. He’s all ball when it’s on the field. All those kids at Alabama, Reed’s the one guy they respect in terms of playing ball. (Character) is documented on him. He’s got some demons.” Admitted to several failed drug tests. “He’s just a mean guy, and that’s a good thing,” said a third scout. “There are a lot of nice guys nowadays. He was the guy that the other players didn’t screw with.” Wonderlic of 15. From Goldsboro, N.C. “He’s charismatic,” said a fourth scout. “He’s not going to give you much as a pass rusher. He’s still a (pocket) pusher. I don’t think he’ll scare the top-tier guards as a rusher. But he’s got a strong anchor. He’s all power.”

KENNY CLARK, UCLA (6-2 ½, 312, 5.07, 1): Third-year junior, two-year starter. “He can use a four-point stance and he’ll two-gap the center,” said one scout. “He keeps his balance and doesn’t get rolled up real easy. But you can move him over a man and he drops that back leg and he has some quickness. I don’t know that he’s a star but he’s a good player.” Was able to maintain separation despite short arms (32 1/8). “I think the wrestling background helps when it comes to his leverage,” said a second scout. “Space eater. He’s about leverage.” Finished with 159 tackles (20 for loss) and 6 ½ sacks. “He’s innately tough, strong and mature,” a third scout said. From San Bernardino, Calif. “I think he can rush passer,” said a fourth scout. “He is an outstanding defensive tackle. He can handle the doubles and invert the nose. Does it all the time.”

SHELDON RANKINS, Louisville (6-1, 302, 5.00, 1): Started 28 of 45 games, the last 26 in a 3-4. “Love him,” said one scout. “Little compact guy. Very productive. Smart (Wonderlic of 26), leader. He’ll probably get overdrafted because his intangibles are so high. I would take him over (former Bear DT) Tommie Harris. He had better pass rush and quicker twitch than Rankins but this guy is high character.” As an undersized, quick 3-technique, comparisons to the Rams’ Aaron Donald are inevitable. “He’s a penetrator,” said another scout. “He can get off blocks. He can do lots of stuff.” Finished with 133 tackles (31 ½ for loss) and 18 sacks. “If you put him at nose and don’t move him, you’re going to be wasting him,” a third scout said. “He wouldn’t be a good nose. He’s a move guy. He can run.” Led DTs in the broad jump (9-10). From Covington, Ga.

ANDREW BILLINGS, Baylor (6-0 ½, 311, 5.01, 1-2): Probably the best of the pure 3-4 NTs. “He doesn’t have that size you’re looking for but he plays very good football,” said one scout. “Strong as hell. Solid kid. This is one you can rely on.” Broke all kinds of records in the Bears’ weight room. “Stumpy and wide-bodied,” said another scout. “He does have pretty long arms (33) for a guy 6-foot. He’s a good point-of-attack run defender but he doesn’t have much of a pass rush. Definitely a two-down player.” Two-year starter with 106 tackles (30 for loss) and 7 ½ sacks. “They rant and rave about how strong he is but he doesn’t play that way all the time,” a third scout said. “He has what it takes to be a good player but he’s not Casey Hampton.” From Waco, Texas.

ROBERT NKEMDICHE, Mississippi (6-3 ½, 295, 4.89, 1-2): Third-year junior from Loganville, Ga. “He’s definitely a top-10 talent,” one scout said. “But he’s got character (issues) so he’ll slide.” Among DEs, he posted the fastest 40 and best vertical jump (35), and his hands tied for the biggest (10 ¾). “I compared him to Chester McGlockton,” one scout said in reference to the DT drafted 16th by Oakland in 1992 whose play didn’t always match his rare ability. “He’s just a great talent. He can do anything he wants to do. But he kind of picks his spots and takes time off.” Three-year starter with 98 tackles (19 for loss) and 7 sacks. “Since his freshman year you’ll see plays where he’ll bull right through the guard,” a third scout said. “Biggest issue I have with him is he’s the same guy now. You wonder why he’s not more developed and not more productive.” Wonderlic of 18. “He’s a different breed,” a fourth scout said. “He marches to his own drummer. When he had the (drunken) fall at the hotel it confirmed a lot of suspicions that people had. Last week, he talked about having a panther as a pet. It’s strictly personality. You wonder, ‘Is he a true football player? Is he dedicated to his craft? Or is he just out in la-la land somewhere?’<TH>”