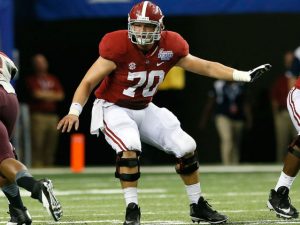 Alabama center Ryan Kelly is getting love from NFL personnel

Bob McGinn of the Milwaukee Journal is one of the best follows during the NFL Draft. He always talks to NFL scouts and gets a break down of most of the top tier prospects.  Here is what Bob wrote about the top 3 centers in the the 2016 NFL Draft. If you want to read about the other prospects you can do so by reading here:

1. RYAN KELLY, Alabama (6-4, 312, 5.03, 2): Assumed the job from Barrett Jones in 2013 and outperformed him. “He’s a lot better than Barrett Jones was,” said one scout. “Does he blow people off the ball? No. Is he tough enough? Absolutely.” Smart (Wonderlic of 29), quick and has the longest arms (33 5/8) of the centers. “He’s got Pro Bowl potential,” said another scout. “Very athletic, tough, strong. I think he’s a two (second-round pick) and it wouldn’t shock me if a team desperate for a center took him late one. He has that Logan Mankins feel when Logan came out of Fresno (in 2005). He’ll have a long career because he’s a technician.” From West Chester, Ohio. “I don’t love him but he’s a day-one starter,” a third scout said. “He needs strength.”

2. NICK MARTIN, Notre Dame (6-4, 298, 5.21, 2-3): Older brother Zack was a four-year starter at LT for the Irish and the Cowboys’ first-round pick in 2014. “He has been compared to his brother,” one scout said. “No way, no way. Just not the same cat. But he’ll play in the league, yes.” Made 27 starts at center and 10 at LG. “Not a great athlete,” said another scout. “Great leader. Just an average guard.” Played much of his final season on a bad ankle. From Indianapolis. “He’s athletically pretty ordinary,” a third scout said. “Plays a little straight-legged. Against quick guys he’ll struggle a little. But he’s got an NFL body, an NFL mind and an NFL demeanor.”

3. MAX TUERK, Southern California (6-5, 297, 5.15, 3-4): Blew out his ACL in a game Oct. 8 and might not be ready this season. “I like him over Kelly but he really had a bad injury,” said one scout. “He can pull and do all kinds of things. But he’s really a slight built guy.” One scout said Tuerk’s weight dipped into the 260s in September. “He has pumped up to 296 or whatever but I don’t know how much of that is real weight,” another scout said. “When he goes to training camp does he end up being a 280-pound center? I can’t think of any 280-pound centers.” Five-position versatility. Started 18 games at center, 14 at LG, four at LT and one at RT. “Really a big-time athlete,” said a third scout. “He’s (Alex) Mack, the same type of guy. He is so quick and so athletic. Somebody told me he might be too tall for center and I said, ‘You’ve got to be kidding me?'” From Trabucco Canyon, Calif. Biggest hands (10 ¾) among centers.